Natural Climate Change has been Hiding in Plain Sight


See refined assessment with evidence (thermalization) that CO2 has no significant effect on climate at http://globalclimatedrivers2.blogspot.com  (rev 10/23/16)


About 41.8% of reported average global temperature change results from natural ocean surface temperature oscillation and 58.2% results from change in the rate that the planet radiates energy to outer space and/or reflects it, as calculated using a proxy, which is the time-integral of sunspot numbers. Using just these two factors explains average global temperatures (least biased values based on HadCRUT4 and other credible measurements) since before 1900 with 89.82% accuracy (R2=0.8982). [See revised attributions] (rev 8/3/19)


If atmospheric carbon dioxide (CO2) is included in the calculation, it might account for as much as 17.6% of reported average global temperature (AGT) change during the period 1909-2005. If CO2 has that much influence, then the calculated ocean surface temperature effect decreases to about 37.8% and sunspot influence decreases to about 44.6%, but accuracy increases an insignificant amount to 90.06%. This miniscule increase in accuracy indicates that CO2 change probably has substantially less than 17.6% influence on average global temperature change.


Some ocean cycles have been named according to the particular area of the oceans where they occur. Names such as PDO (Pacific Decadal Oscillation), ENSO (el Nino Southern Oscillation), and AMO (Atlantic Multidecadal Oscillation) might be familiar. They report the temperature of the water surface while the average temperature of the bulk water that is participating in the oscillation can not significantly change so quickly because of its high thermal capacitance 5.


This high thermal capacitance absolutely prohibits the reported rapid (year-to-year) AGT fluctuations as a result of any credible forcing. According to one assessment 5, the time constant is about 5 years. A possible explanation is that the reported rapid fluctuations may be stochastic artifacts of the process that has been used to determine AGT. A simple calculation shows the standard deviation of the reported annual average measurements to be about ±0.1 °K with respect to the trend. The temperature fluctuations of the bulk volume near the surface of the planet are more closely represented by the fluctuations in the trend. The trend is a better indicator of the change in global energy; which is the difference between energy received that is above or below break-even and energy radiated above or below break-even.


There is some average surface temperature oscillation that accounts for all of the oceans considered together of which the named oscillations are participants. Studies 1,2,3,4 of the primary contributor (the PDO) to this planet-wide oscillation have been done which identify the period of this oscillation to be in the range of 50-70 years. One of these studies considered data from as far back as 1000 years.


Complex phase relations between the various local cycles cause the effective over-all oscillation to vary in magnitude and period over the centuries. In the present assessment, the period of the planet-wide oscillation, since before 1900, has been found to be about 64 years with a magnitude of about ± 1/5 °K. The most recent calculated trend peak was in 2005.


Sunspots have been suspected as being associated with climate change for a long time. Sunspot numbers are recorded as solar cycles which have been considered by others for magnitude or for time factors with poor success when trying to correlate with AGT trends.

The first law of thermodynamics, conservation of energy, is applied to evaluate the hypothesis that the temperature trend is influenced by sunspot numbers. Average global temperature has not changed much over the centuries so on average, over the centuries, energy-in equals energy-out. In any one year, the energy-in is given by

where ‘B’ is the proxy factor. If the AGT never changed, the energy-out is given by

Subtracting (b) from (a) results in the energy change for any year. Also, factor out B

With appropriate offset this becomes the sunspot number contribution to the temperature anomaly. The high coefficient of correlation demonstrates that the hypothesis is true.


Atmospheric CO2 is called a greenhouse gas (ghg) because it absorbs electromagnetic radiation (EMR) within the range of significant Stephan-Boltzmann (black body) radiation from the planet. The EMR that CO2 absorbs (and emits) is only over a very narrow band of the over-all radiation spectrum from the planet (never mind that the ghg effect is an insignificant factor in how greenhouses work). Most of the EMR that is absorbed is emitted (nearly all of the absorption and emission is actually by water vapor) but about 11.59% is thermalized 8 and appears as sensible heat which warms the atmosphere.


Added increments of CO2 and other ghgs exhibit a logarithmic decline in their influence on AGT. This is accounted for mathematically for each year by taking the logarithm of the ratio of the average CO2 level for the year to the CO2 level in 1895, which was 294.8 ppmv (Law Dome 7). The cumulative effect to a year of interest is the summation of the effects for prior years plus the effect for the current year. The best current source for atmospheric carbon dioxide level 6 is Mauna Loa, Hawaii.


The net effect on AGT of the combination of the above three contributing factors is obtained by their sum. The word equation is: anomaly = ocean oscillation effect + net sunspot & thermal radiation effect + CO2 effect + offset. This is expressed in the following physics-based equation. 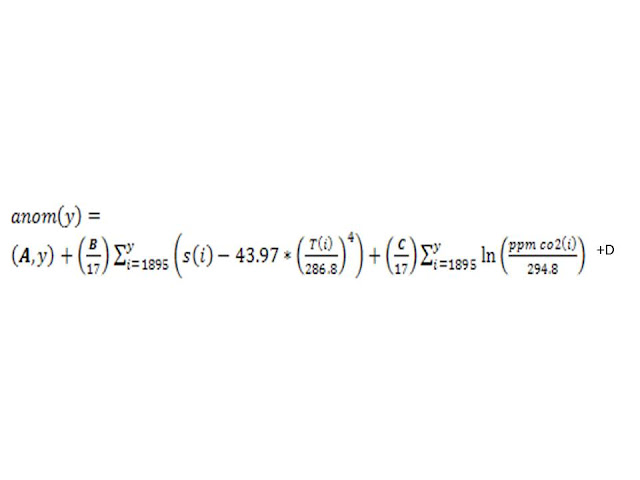 
(A,y) = Effective Sea Surface Temperature Anomaly (ESSTA) in year y calculated using a range (peak-to-peak magnitude) of A, °K, and the number of years since the last maximum or minimum. ESSTA is a simple (saw-tooth) surface temperature approximation of the net effect of the Pacific Decadal Oscillation (PDO) and all of the other natural ocean oscillations, named or not. It has a maximum amplitude of about ± 1/5 °K with no intrinsic energy change for the bulk volume at any time between the beginning value and the end value of its estimated 64 year period. The most recent peak was in 2005.


B is a proxy factor in the function that accounts for the solar radiation, W yr m-2.


C is a multiplier in the function that accounts for the influence of atmospheric CO2, W yr m-2


D is merely an offset that shifts the calculated trajectory vertically, without changing its shape, to center it over the measurements, K degrees. This offset is equivalent to having selected slightly different reference temperatures for the measured anomalies.


A, B, C, and D are calibration coefficients which have been determined to maximize the coefficient of determination, R2 (which makes the least biased fit of the trajectory, that is calculated using the physics-based equation, to measurements). Some have mistakenly interpreted these coefficients to indicate mathematical curve fitting, which is something that is entirely different. Instead, the coefficients allow the rational estimation of the amount that each of the two or three major contributors has made to the total temperature change.


It is worth emphasizing that equation (1) provides for a test to determine the influence, or lack thereof, of CO2 to the total contributions to global anomalies by forcing the coefficient, C, to zero and adjusting the other coefficients to maximize R2.

In Figure 1, the anomaly trajectory calculated using Equation (1) is co-plotted with measurements. The excellent match of the up and down trends since before 1900 is displayed and corroborates the usefulness and validity of Equation (1). 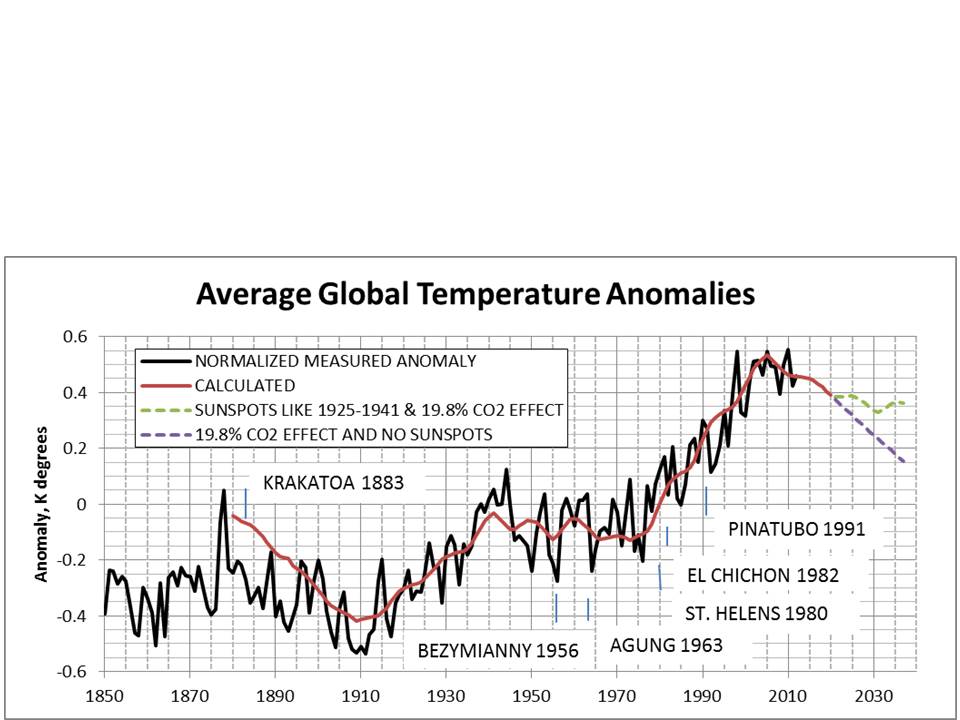 Projections until 2020 use the expected sunspot number trend for the remainder of solar cycle 24 as provided 9 by NASA. After 2020 the limiting cases are either assuming sunspots like from 1925 to 1941 or for the case of no sunspots which is similar to the Maunder Minimum.


The influence of CO2 can be removed from the equation by setting C to zero. Doing so results in an insignificantly lower coefficient of determination (R2). The coefficients in Equation (1) and resulting R2 are presented in Table 1.


It is easy to show that an increase in average cloud altitude of about 100 meters would account for half of the AGT increase in the 20th century that some have referred to as ‘Global Warming’. Increased low level clouds also means increased over-all cloud cover with attendant increased albedo. This also leads to declining AGT 11.

Climate science appears to have missed the above and other factors 12.

It is trivially easy for anyone with access to existing CO2 and temperature measurement data-sets to falsify the statement that CO2 (at any level that ever existed) causes significant warming.

If CO2 is a forcing, a scale factor times average CO2 level times the duration divided by the effective thermal capacitance (consistent units) equals the temperature change of the duration. Thus the temperature responds gradually to a forcing. During previous glaciations and interglacials (as so dramatically displayed in An Inconvenient Truth) CO2 and temperature went up and down nearly together. This is impossible if CO2 is a significant forcing so this actually proves CO2 CHANGE DOES NOT CAUSE SIGNIFICANT CLIMATE CHANGE.

See more on this and discover the two factors that do cause climate change (95% correlation since before 1900) at http://agwunveiled.blogspot.com . The two factors which explain the last 300+ years of climate change are also identified in a peer reviewed paper published in Energy and Environment, vol. 25, No. 8, 1455-1471.


This assessment demonstrates that the annual average temperatures of the planet, for at least as far back in time as accurate temperatures have been measured world wide, are accurately calculated by considering only natural ocean oscillations and the sunspot numbers, and that credible changes to the levels of non-condensing greenhouse gases have no significant influence on average global temperature.


Equation (1) explains approximately 90% of the AGT trajectory since before 1900. All factors that were not explicitly considered must find room in the unexplained 10%. 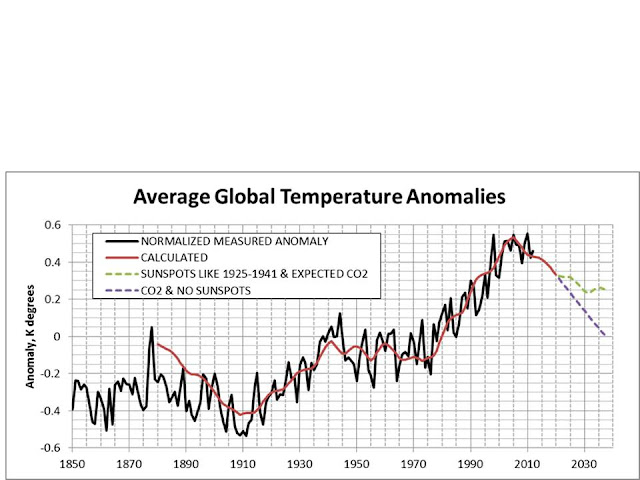 Obsolete graph
Posted by Dan Pangburn at 1:56 AM